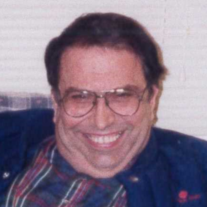 Wm Barry “Huggy Bear” Clark, 69, of Owensboro passed away Thursday, February 28, 2019 under the care of Hospice of Western Kentucky. He was born in Owensboro on December 11, 1949 to the late Robert W. Clark, Jr. and Anna Dean Horton Clark. Barry was retired from Whirlpool where he worked in shipping and receiving. He was a union steward and worked for whirlpool for 40 years. He was a graduate of Daviess County High School in 1967 and a member of Crazy Horse Mustang Club. He enjoyed cars, cars, cars, and cars (he lived and breathed cars). Barry also enjoyed NASCAR and UK Sports. Barry is survived by his wife of 46 years, Bonnie Hagan Clark, his brother, Jay (Kim) Clark of Santa Claus, Indiana, his niece, Angie Clark, his nephews, Jeffrey Clark, Cameron Clark, and several other nieces and nephews. Services will be 10:00 am Monday, March 4, 2019 at Haley McGinnis Funeral Home & Crematory. Visitation will be from 4:00 pm to 8:00 pm Sunday, and again from 9:00 am to 10:00 am Monday at the funeral home. Inurnment will take place at a later date. Expressions of sympathy may take the form of donations to the Humane Society; 3101 West 2nd Street; Owensboro, Kentucky 42301, and Habitat for Humanity; 1702 Moseley Street, Owensboro, Kentucky 42303. Envelopes will be available at the funeral home. Haley McGinnis Funeral Home & Crematory is both honored and privileged to be entrusted with the care of Mr. Clark. Share your messages of condolence with the family of Wm Barry “Huggy Bear” Clark at www.haleymcginnis.com