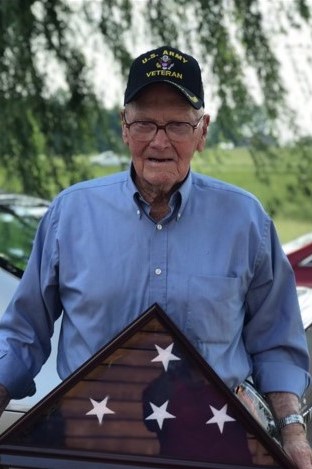 William Henry Lawson, age 97, of Glasgow, died Wednesday, April 7, 2021, at NHC Healthcare in Glasgow. He was born in Glasgow on May 28, 1923, to the late Jonathan Leslie Lawson and the late Elizabeth (Abner) Lawson. Mr. Lawson was a farmer and a retired school bus driver. He was a veteran of the U.S. Army, serving in WWII,

In addition to his parents, he was preceded in death by his wife, Helen Olean (Pedigo) Lawson; one brother, Jessie Lawson; four sisters, Minnie Rutledge, Odell Gilpin, Zula Bunch, and Myrtie Hennion.

Funeral services will be held at 1:00 PM, Tuesday, April 13th at Wisdom Faith Community Church with burial in the Wisdom Faith Community Church Cemetery with military honors provided at graveside by DAV chapter 20 of Glasgow. Visitation will be 4:00 PM until 8:00 PM, Monday at A.F. Crow & Son Funeral Home and 11:00 AM until time for the services Tuesday at the church. To view the service via livestream, please visit www.facebook.com/crowfuneralhome

All those who wish to honor and remember Mr. Lawson in person at the service must wear a mask or other appropriate facial covering and practice physical distancing for the safety of those in attendance.

A.F. Crow & Son is both honored and privileged to be entrusted with the care of Mr. Lawson.