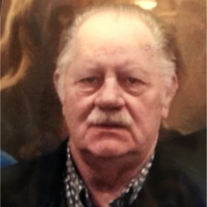 William G. “Bill” Edgell, 70, of Curdsville passed away Friday, February 21, 2020 at his son’s residence. He was born in Daviess County on April 8, 1949 to the late W.C. and Betty Allen Edgell. Bill was a retired truck driver and an ordained pastor. He served in the U.S. Army as a Sergeant and completed two tours in Vietnam. He as a member of Pleasant Memorial Baptist Church, and a proud member of the VFW. Bill enjoyed watching Western movies, and was a fan of Hank Williams, like his father. Along with his parents, Bill was preceded in death by his wife, Betty Lanham Edgell, in December of 2016; and his son, Barry Eugene Edgell, in 1987; his siblings, Wallace Edgell, Donald Edgell, Jerry Edgell, David Edgell, Betty Sue Edgell, Margaret Sparks, Schery Howard, and Linda Burrows. Bill is survived by his children, Robin Edgell, Todd (Deanna) Edgell, and Stephen (Christal) Edgell of Clarksburg, West Virginia; several grandchildren; and his siblings, Paula Edgell, Charlene Sikes, and Anthony Edgell. Services will be 1:30 pm Wednesday, February 26, 2020 at Haley McGinnis Funeral Home & Crematory. Burial will follow at Pleasant Grove Cemetery in Fordsville. Visitation will be 3:00 pm to 7:00 pm Tuesday, and again 11:30 am to 1:30 pm Wednesday at the funeral home. Haley McGinnis Funeral Home & Crematory is both honored and privileged to be entrusted with the care of Mr. Edgell Share your messages of condolence with the family of William G. “Bill” Edgell at www.haleymcginnis.com