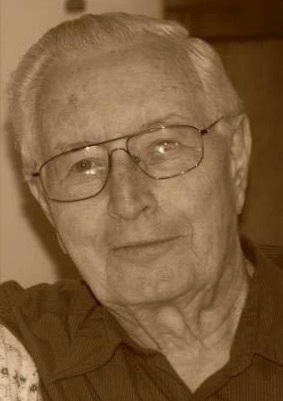 Victor “Vic” L. McCoy, Sr., 90, passed away July 19, 2020, at BridgePointe Health Campus. Vic was retired from Prestolite. He was a member of Vincennes Masonic Lodge #1, F & AM, and the Hadi Shrine Temple. An avid bowler, he was a super Cubs fan. Born March 9, 1930, in Moline, IL, he was the son of Edward and Rhoda (Ravelette) McCoy. His parents; his sisters, Frances “Fannie” Johnson, Marie McCoy, and Hazel Evans; and his brother, David McCoy preceded him. Surviving is his wife, Helen (Ballard) McCoy; his children, Victor McCoy, Jr. of Vincennes, IN, Rosanna Stubblefield of Vincennes, IN, Steve McCoy and his wife, Lisa, of Centre, AL, John McCoy of Melbourne, FL, and Gail Vaughn and her husband, Noel, of Murfreesboro, TN; his grandchildren, Scott McCoy, Cody McCoy, Eric McCoy, Dana Hayes, Vicki Laschinski, Victoria Noelle Vaughn, Gretchen Vaughn, and Chase Vaughn; several great-grandchildren; and 2 great-great grandchildren, John and Brantley McCoy. A graveside service will be held on Saturday, at 1:00, at Memorial Park Cemetery. Goodwin-Sievers Funeral Home is assisting with the arrangements. In lieu of flowers, donations may be made to the BridgePointe Activities Dept. Online condolences may be sent to the family through goodwin-sievers.com.