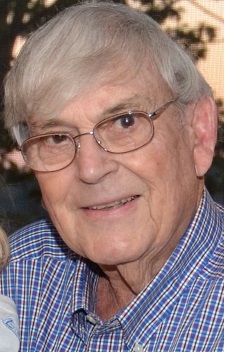 Born in: Burns City, IN
Resided in: Washington, IN

Vaughn Eldon Garrett, 87, of Washington, Indiana passed away peacefully on Saturday, August 28th, 2021 at his home surrounded by his loving wife and family. He was born on April 13, 1934 in Burns City, Indiana to Rolla V. and Hildred (Waggoner) Garrett.

Vaughn was a 1952 graduate of Loogootee High School where he played basketball for the Loogootee Lions and fell in love with the love of his life, Sue (McGovren) Garrett. Vaughn and Sue were married for sixty-six beautiful years. Vaughn was owner of General Bottle Gas Corporation, Washington-Loogootee. He was an active member of Our Lady of Hope Catholic Church, Washington Moose Club, the Eagles, American Legion, and Knights of Columbus Council 630, Washington, Indiana where he was a Fourth Degree Knight. He was a lover of the outdoors. He enjoyed hunting and fishing, music and guitar, epic story & joke telling, being with his close friends and never leaving the side of his sweet wife.

A Mass of Christian Burial will be held at Our Lady of Hope Catholic Church, 315 NE 3rd St., Washington, IN 47501 on Wednesday, September 1, 2021 at 11am. Friends may visit with Vaughn’s family Tuesday, August 31st, from 5pm -8pm at Goodwin-Sievers Funeral Home, 2020 State Street, Washington, IN. The Knights of Columbus will pray the rosary at 5:30pm during the visitation period.

Vaughn will be laid to rest in St. John Cemetery. Memorial Contributions may be made to Washington Catholic Endowment Fund, Our Lady of Hope Catholic Church, or Heart to Heart Hospice Care. Goodwin-Sievers Funeral Home is honored to be entrusted with the care of Vaughn.