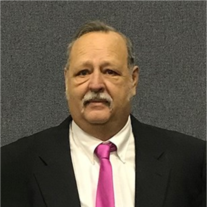 Thomas R. Mounts, 68, of Owensville, IN went to be with the Lord January 21, 2020. He was born May 21, 1951 in Princeton, IN to Robert A. Mounts and Aileen (Land) Mounts. Tom attended Ft. Branch High School and was in the graduating class of 1969. He married the love of his life Susan (Wade) Mounts on November 8, 1986. They were blessed with their daughter Stephanie shortly after. Tom retired from Whirlpool in 2010 after 40 years of service. He has worked at AutoZone for the last 8 years. Tom loved sports, it did not matter if it was professional, college, or high school. He was an umpire for 30 years for girls softball and little league baseball. Tom was a fan of IU, The Cardinals, Gibson Southern basketball, football, baseball, and softball. He was a big card player and enjoyed a game of Clabber, Rook, and Euchre. Tom was known as an instigator and always loved picking on his nieces and nephews. He really enjoyed traveling in his younger years. Tom was the President of the Ft. Branch Lions Club and a member of First Christian Church. He will be remembered as a big gruffy man that was really just a loving marshmallow. Tom will be missed by so many. He is preceded in death by his father Robert A. Mounts, sister Teresa Green, and brother Ronald Mounts. Tom was survived by his mother Aileen Mounts; wife Susan Mounts; daughter Stephanie Mounts; sister Sheila (Bruce) Bridges and brother Robert (Marty) Mounts; brother-in-law Ronald Green; and many nieces, nephews, and friends. Holder’s Funeral Home is honored and privileged to be entrusted with the care of Mr. Mounts. Visitation will be held Sunday, January 26, 2020 at Owensville First Christian Church, 4680 W. Sate Hwy 168 from 2p-6p and Monday 10a-11a. Funeral will be Monday at 11a with Bart Newton officiating and interment at Benson Cemetery. The family would like to thank all the staff and doctors at Deaconess Clinic, especially Dr. Reddy. and Davida for their loving and compassionate care for Tom. Memorial contributions can be made to First Christian Church.