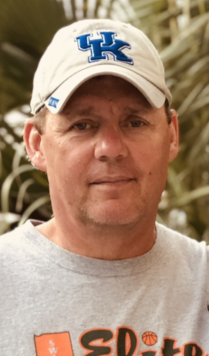 Terry Wayne Anderson, 59, of Owensboro, Kentucky passed away Tuesday, August 25, 2020 at Owensboro Health Regional Hospital. Terry was born in Owensboro on June 3, 1961 to Hugh Anderson and the late Mary Carleen Kelley Anderson. He was employed at Southwire where he worked as a Drawing Machine Operator for 22 years. Terry served in the United States Marine Corps. He was a member of Owensboro Christian Church. He loved his family and children, especially his grandchildren. He could make everyone laugh. Terry enjoyed watching basketball, especially University of Kentucky and traveling. One of his favorite places to travel was to the mountains. Terry was a fighter, and was well-known for his firework shows.

Along with his mother, Terry was preceded in death by his brother, Keith Anderson.

The family would like to extend a thank you to the three special nurses who became like family, Angela Thomas, Amanda Fazio, and Jayme Pharis.

Services will be 1:00 pm Saturday, August 29, 2020 at Haley McGinnis Funeral Home & Crematory, with Brother Caleb Potter officiating. Burial will follow at Sorgho Baptist Church Cemetery. Visitation will be from 5:00 pm to 8:00 pm Friday, and again from 11:00 am until the time of service Saturday at the funeral home.

All those who wish to honor and remember Terry in person at the visitation or service are required to wear a mask for the safety of all those in attendance.

Haley McGinnis Funeral Home & Crematory is both honored and privileged to be entrusted with the care of Terry Wayne Anderson. Share your messages of condolence with the family of Mr. Anderson and sign his virtual guest book by going to www.haleymcginnis.com.