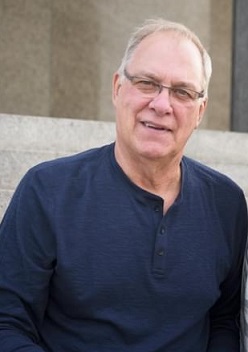 Born in: Grand Forks, ND
Resided in: Vincennes, IN

Steve was a member of St. Francis Xaiver Catholic Church. Steve had been in a Management Role with Cargill, working in that capacity for forty plus years. He made many lifelong friends during his time with Cargill while working in, North Dakota, Montana, Missouri, Indiana, and retiring in Illinois.  He moved back to Vincennes with Becky to be close to children and grandkids, leaving behind the Boyz in the Hood as they called themselves in Granville, IL. He was a person that could always draw people to him and would do anything for you. He enjoyed watching his children and grandchildren sporting events and loved having them over to swim. He enjoyed sitting by his pool, loved to grill, always had a garden and planted way too much.

Friends may visit with Steve’s family from 3-8 pm on Wednesday, August 4, 2021 at Highland Woods Community Center 1377 Hart St., Vincennes, IN 47591. A Mass of Christian Burial will be held at 1:00 pm on Thursday, August 5, 2021 at Sacred Heart Catholic Church, 2004 N. 2nd St., Vincennes, IN 47591 with Rev. Tony Ernst officiating. Steve will be cremated and the family will have a private burial service. On line memories may be shared with Steve’s family and friends at www.goodwinsievers.com. Goodwin-Sievers Funeral Home, Vincennes is honored to be entrusted with the care of Steve.