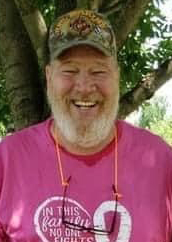 Stanley E. Arachikavitz, of Owensboro, Kentucky, lost his seven-year fight with lung cancer and passed away Sunday, September 27, 2020, surrounded by family. He was born in Owensboro on July 18, 1954, to the late Stanley A. and Martha (Reisz) Arachikavitz. He was a 1973 graduate of Owensboro Catholic High School where he led the Aces football team to a 10-1 record, broke records in his senior year including receptions, pass yardage for receptions and total number of extra points. He was a member of the 1972-73 Kentucky All-State High School Football Team and in 1996 he was inducted into the OCHS Athletic Hall of Fame as the “Football Player of the 1970’s.”

After high school, Stanley joined the United States Army and eventually the U.S. Marines. He became a truck driver for many years, worked at Hickory Springs Manufacturing, earned a history degree from Brescia University, and during his retirement years he loved working as a greeter at Walmart on Highway 54.

Stanley loved the Lord Jesus Christ and exuded this with everyone he met. He was an extremely active member of Larkin Baptist Church, took great enjoyment volunteering with the American Cancer Society’s Relay for Life of Spencer County. He always stood ready to lend a helping hand whenever needed and to whomever needed it. Stanley was an avid deer hunter who loved everything about being in nature and spent many a day at his hunting land.

Services will be held at 10:30 a.m. on Sunday, October 11, 2020 at Larkin Baptist Church; 2531 West Old State Road 45, Rockport, Indiana 47635. Immediately following the service, a potluck style picnic and celebration of Stanley’s life will occur on the church grounds. In lieu of flowers or other tangible condolences the family encourages donations to Relay for Life of Spencer County.

All who wish to honor and remember Stanley in person at the service are required to wear a mask or face covering while inside the church for the safety of all those in attendance.

Haley McGinnis Funeral Home & Crematory is both honored and privileged to be entrusted with the care of Mr. Arachikavitz. Share your messages of condolence with the family of Stanley E. Arachikavitz and sign his virtual guestbook by going to www.haleymcginnis.com.