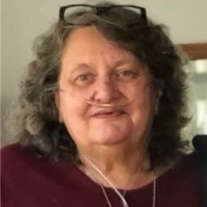 Shirley Ann Pedigo, 58, of Glasgow, passed away Friday, February 7, 2020 at the Barren County Nursing & Rehab in Glasgow. She was born in Jeffersonville, IN on April 12, 1961, the daughter of the late Charles C. Eubank and the late Reba Evalene Matthews Ward. Shirley was a homemaker and work at several public jobs. She attended Highland Hills Community Church and was a former member of Temple Hill Baptist Church. Survivors include one son, Matt Pedigo (Makayla) of Glasgow; one daughter, Shawnna Poore of Glasgow; one step son, Brian Pedigo of Glasgow; one step daughter, Brandi Sanders (Dustin) of Nashville, TN; four grandchildren, Cheyenne Poore, Cassie Poore, Addison Pedigo and Meredith Pedigo; two brothers, Ed Eubank (Betty) of Goldsboro, NC and Tim Eubank of Glasgow; several nieces and nephews also survive. In addition to her parents, she is preceded in death by her husband of 28 years, David Earl Pedigo; one brother, Kevin Eubank; one sister, Sandra Eubank. Funeral service for Shirley Pedigo, will be 11:00am Tuesday, February 11, 2020 at the A.F. Crow & Son Funeral Home with burial in the Bristletown Cemetery. Visitation will be on Monday from 4:00pm until 8:00pm and on Tuesday morning until time for service at the funeral home. A.F. Crow & Son Funeral Home is both honored and privileged to be entrusted with the care of Shirley Pedigo. Please share your condolence with the family of Mrs. Pedigo at www.crowfuneralhome.com