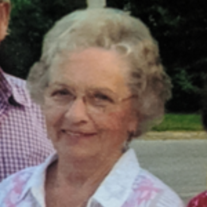 Sharon J. Douglas, 85, of Owensville, IN went to be with the Lord January 10, 2020. She was born September 8, 1934 in Princeton, IN to the late Noble and Doris (Rainey) Woods. Sharon was in the 1952 graduating class at Princeton High School. She worked at Hansen Corporation during high school and until she was married. Sharon married Frederick Douglas after completing school. They were married 60 years at the time of his passing. Sharon enjoyed being a farmer’s wife. She would often help around the farm and even assist with putting out crops. Sharon loved to cook for her family and friends. She was very proud of many things, such as being a majorette in high school, being a member of the Indiana Club, but most of all her grandchildren. Sharon always attended the grandchildren’s sporting events proudly. She enjoyed a great game of Rook and spending time with her family. Sharon was a lifelong member of Owensville United Methodist Church. She was preceded in death by her husband Frederick Douglas; son John Douglas; and siblings Yvonna Jones and Carolyn Henson. Sharon is survived by her children Mick Douglas and Dixie (Bill) Dickerson; grandchildren Deidra Dickerson, Gunner Douglas, and Kix Douglas; and brother Steve Woods. Holders Funeral Home is honored and privileged to be entrusted with the care of Mrs. Douglas. Visitation will be Tuesday, January 14, 2020 at Holders Funeral Home from 4p-7p. Funeral will be 10a Wednesday with interment at Clark Cemetery. In lieu of flowers contributions can be made to The Owensville United Methodist Church.