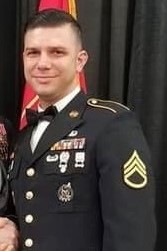 He is preceded in death by his grandfather, Robert James.

Memorial contributions may be made to the Til Valhalla Project, 3400 Agricultural Center Dr. Saint Augustine, FL 32092. A.F. Crow & Son Funeral Home is honored to be entrusted with the care of Sergeant First Class James. Please share your condolence with the family at www.crowfuneralhome.com or an online guestbook and obituary is available at www.mackiefh.com.