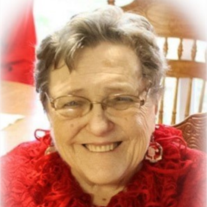 On August 14 1942, in Indianapolis, IN Doris (Leathers) Muston and her husband Robert Allen Muston were proud to bring this beautiful and strong woman into this world. Her life began in the small Indiana town of Tilden and was later joined by two younger siblings, her brother Darrel Wayne Muston (Nancy) who preceded her in death, and her sister Nedra Ella Goodwin (Ron). Growing up next to her grandparents, she was raised surrounded by unconditional love and she carried that love with her throughout her life. As a young woman she was running to meet a friend and as she rounded the car she found herself leaping over the outstretched legs of Richard Lee Fishback. Neither of them knew that her leap through the air would be the beginning of a life long love affair. On June 5th 1960, Richard married his beautiful bride (as he continued to address her every night of her life) at the North Salem Christian Church in Indiana. They started their family shortly thereafter, while living in Belleville, Danville, and Brownsburg, IN, having four 'perfect' children, Duane Edward Fishback (Amy), Debra Lynn Ferrell (Vaughn), Sheila Cay Fishback and Steven Douglas Fishback (Tammy). They moved to Jamestown, KY when all the kids were in school, then fate graced them with the opportunity to move to Sedona, AZ. The family began to flourish, find love, and gave her grandchildren. Moving once more, they lived in Las Vegas, NV for seventeen years. Then their path was set to move for the last time, down to Edmonton, KY, where she lived out the last fifteen years of her life. She loved and adored her fourteen 'perfect' grandchildren and twenty-one 'perfect' great-grandchildren. She had a great passion for family, back roads, traveling, nature, cooking and bringing her large family together. She was a loving woman that never met a stranger, forgave easily, gave wonderful hugs and loved completely. She battled and won over many health issues during her 77 years and at noon on Wednesday November 13th, 2019 she drew her last breath at the TJ Samson Hospital in Glasgow, KY and gained her angel wings with her family surrounding her. She was an earthly angel in the shape of a wife, mother, grandmother, sister and aunt. She will continue to be treasured in the memories of her loving family and everyone that knew her. There will be a celebration of life ceremony at the Edmonton Senior Center on December 14th from 2:00 pm to 5:00 pm. Christmas was her favorite holiday so we would like everyone to join in the spirit of the season and dress festive for her.