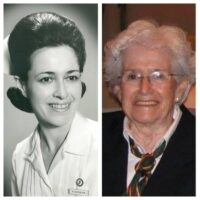 Born in: Vincennes, IN
Resided in: Evansville, IN

Ruth was the first-born child of Maurice and Alzier Mouzin.  She grew up on a melon farm on rural Main Street Road and attended St Vincent grade school. Although she loved her family and their life on the farm Ruth was quick to point out that farm life was not her calling. She enjoyed recalling stories from her childhood where she tried unsuccessfully to out-smart her dad with some farming short-cuts, like the time he caught her filling the bottom half of strawberry boxes with weeds so she only had to add strawberries to the top. No one could ever fool her Dad; she always knew that.

After graduating from Decker High School in 1948, Ruth went on to graduate from Good Samaritan Hospital Nursing school where she developed life-long friendships with her classmates. Part of her nurses training involved a 6-week stint in Indianapolis hospitals which was an experience Ruth would always cherish. She returned to Knox County and worked for Good Samaritan Hospital as a registered nurse for over 40 years. She also worked as Dr. Louie Dayson’s nurse in the late 60’s and early 70’s and again in the late 90’s before retiring. She truly loved the “old style” nursing which focused more on the actual care of the patient than on the documentation of it. Ruth said she always felt so good after a long shift at GSH. She held dear the relationships she had with doctors, fellow nurses, aides, hospital staff, and most of all her patients. She was named GSH’s first and only “Nurse Good Samaritan” in 1966 for her exemplary work as a nurse.

In 1955, Ruth married Raymond Eaton. Ruth was a proud mother to their two sons who contributed to her black hair turning prematurely gray.  She parented by letting her sons make their own mistakes (which they did) but she knew (rightly so) that they would learn from those mistakes (which they did). She loved the boy’s friends especially the ones from the old neighborhood on Broadway St as well as the ones from high school. She was known to look the other way if a beer party ensued at the house and would even join in on occasion (well … most of the time). Her house was filled with the sounds of friends and laughter and usually the music of the Eagles. (Tequila Sunrise never sounded so good as on her old Zenith turntable.)  Ruth was extremely proud of all of her grandchildren and great-grandchildren and enjoyed going to their ball games, dance recitals, art shows, choir concerts, and cross country and track meets.

Ruth was a proud Decker High School alumnus but was quickly converted to a die-hard Lincoln Alice basketball fan in the glory years of the 1960s,1970s, and 1980s. She loved cheering on the Alices from her chair seat in Adams Coliseum. She also loved to watch IU basketball in Coach Knight’s heyday and stayed loyal to the Hoosiers till the end of her time on earth.

Ruth attended St John’s Catholic Church and was a faithful follower of Christ. She had many interests throughout her lifetime; she loved traveling with her sister, Selma, taking care of her home and yard, walking with her dog, and shopping for the latest fashions. More than anything, Ruth enjoyed socializing. She loved spending time with the people in her life who were important to her and loved meeting new people. In the twenty years Ruth and Raymond were married, they enjoyed many fun times with friends and family. As more and more friends and family left this earth ahead of her, Ruth looked forward to the day they would all be together again in the great beyond. The party has probably already started.

Ruth was preceded in death by her parents; Maurice and Alzier (Horsting) Mouzin, her brother Don Mouzin, Oaktown, and her sister Patty Mouzin who died in childhood. Her former husband, Ray Eaton also preceded her in death.

Friends may visit with Ruth’s family on Thursday, October 28, 2021 from 4-8 pm at Goodwin-Sievers Funeral Home, 524 Broadway, Vincennes, IN 47591. A Mass of Christian Burial will take place on Friday, October 29, 2021 at 11:00 am at St. John’s Catholic Church, 803 Main St., Vincennes, IN with Rev. Tony Ernst as celebrant. Ruth will be laid to rest in Mt. Calvary Catholic Cemetery. On line memories may be shared with Ruth’s family and friends at www.goodwinsievers.com. Goodwin-Sievers Funeral Home is honored to be entrusted with the care of Ruth.