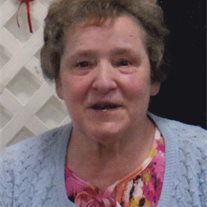 Ruby F. Allen, age 75 of Leitchfield, passed away Sunday, March 5th 2017 at the Norton Brownsboro Hospital in Louisville. She was born December 22nd 1941 in Grayson County, Kentucky, the daughter of Senate & Nell Drucilla Kerr White. She is survived by her husband, Ralph Allen, one sister, Carolyn White, three brothers, Roger White (Judy), Thomas White (Beverly), & Darrell White (Sandy), and several nieces & nephews. Other than her parents, she was preceded in death by one sister, Ruth Sherrard.