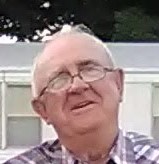 Born in: Princeton, IN
Resided in: Owensville, IN

Roy Allen Cooper, 76, of Owensville, IN went to be with the Lord June 10, 2021. He was born in Princeton, IN on February 2, 1945 to the late Roy J. and Jean (Miller) Cooper.  Roy attended Patoka High School and was a member of Maumee General Baptist Church. He retired from Indiana Southern as a yard foreman after 30 years of experience. Roy enjoyed watching dirt track racing, fishing and tending to his yard.

Holder’s Funeral Home is honored and privileged to be entrusted with the care of Mr. Cooper. A memorial service will be announced at a later date.