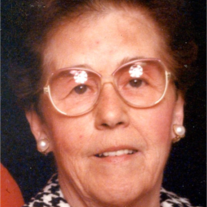 Rosie Lawwill, 92, of Glasgow, died Thursday, January 2, 2020 at the Barren County Healthcare Facility in Glasgow. She was born in Winchester, KY, March 31, 1927 the daughter of the late Henry Hall and the late Kate Hall. Rosie retired from Sorenson Manufacturing after 27 years and is a member of the kingdom hall of Jehovah Witness in Glasgow. Survivor include a son, Steven Lawwill of Glasgow, granddaughter, Sherry Keen of Glasgow; grandson, Chad Whitlow of Glasgow; two great grandchildren and two great great grandchildren. nieces and nephews also survive. In addition to her parents, she is preceded in death by her husband, Guynn Lawwill; mother who raise her, Rose Christopher; son, John Lawwill; daughter, Peggy Byrd; sister, Loretta Osborne. Funeral services will be 3:00pm Monday, January 6th at the A.F. Crow & Son Funeral Home with burial in the Glasgow Municipal Cemetery. Visitation will be on Monday from 11:00am until time for service at the Funeral Home. A.F. Crow & Son Funeral Home is both honored and privileged to be entrusted with the care of Mrs. Lawwill. Share your condolence with the family of Rosie Lawwill at www.crowfuneralhome.com