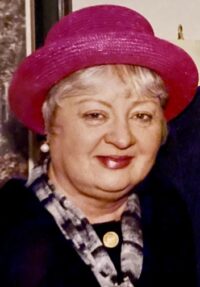 Vincennes native Rose Marie Grumieaux passed away at the age of 91 on February 19, 2022, at St. Vincent’s Hospital in Evansville. Rose Marie was born June 11, 1930, to Vern E. and Hazel J. (Newman) Draime in Vincennes, IN. She was a member of Sacred Heart Catholic Parish.

Rose Marie was a strong, capable woman who encouraged her husband to do things for the betterment of the community. She was a 1948 graduate of Lincoln High School. She graduated from the Good Samaritan Hospital nursing program in 1951 and worked as a surgical nurse. She married Robert A. Grumieaux on March 31, 1951.

Rose Marie was active for over 50 years in the Knox County Homemakers Club serving as a past President and held various other offices throughout the years. She particularly enjoyed her position as song leader.

She is preceded in death by her husband Robert A. Grumieaux, her parents, brothers Tom and Woody Draime and Charles Jarvis; sister Billie JoAnn (Draime) Cook and one son John Jeffrey Grumieaux.

Friends may visit with Rose Marie’s family from noon until the hour of service time of 1:00 pm on Friday, February 25, 2022, at Goodwin-Sievers Funeral Home, 524 Broadway, Vincennes, IN with Rev. James A. Payne officiating. Rose Marie will be laid to rest next to her husband Bob in Mt. Calvary Cemetery. The Grumieaux family has requested contributions be made to Purr-fect Place Shelter, Inc., 2388 N. Clydesdale Dr., Vincennes, IN 47591. Online memories may be shared with Rose Marie’s family at www.goodwinsievers.com. Goodwin-Sievers Funeral Home is privileged and honored to be entrusted with the care of Rose Marie.