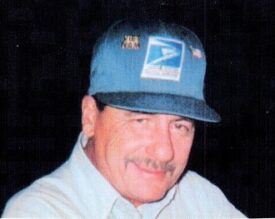 Ronnie served his country in the United States Army and was a dedicated mail carrier for the United States Postal Service for over forty years. He was a member of the VFW, American Legion. And the 40 et 8. He also was a loyal St. Louis Cardinal fan.

Friends may visit with Ronnie’s family from 11 am until 1 pm on Monday, October 11, 2021 at Goodwin-Sievers Funeral Home, 524 Broadway, Vincennes. A graveside service for Ronnie will be held at 1:30 pm on Monday, October 11, 2021 at Memorial Park Cemetery, 919 Willow St., Vincennes, IN. The Moose Lodge will hold a bereavement meal immediately following the graveside service. On line memories may be shared with Ronnie’s family and friends at www.goodwinsievers.com. Goodwin-Sievers Funeral Home is honored to be entrusted with the care of Ronnie.