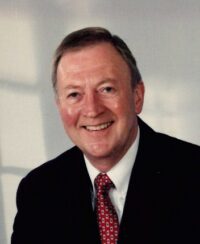 Born in: Daviess County, IN
Resided in: Vincennes, IN

Ron was a graduate of Washington High School and started Shurway Grocery Store. He owned and operated Shurway Grocery for many years and then became a stockbroker in 1979 and did this until his retirement in 2002. Ron was very instrumental in his community and involved in many civic organizations. He was a member of the Elks, Harmony Society, Moose, Daviess and Knox County Chamber of Commerce, Washington and Vincennes Rotary Clubs, and was also a member of the Washington Community School Board of Directors. The idea of the Daviess County Turkey Trot Festival and races was hatched in early 1972 by members of the Daviess County Chamber of Commerce led by President Ron Myers. Ron was also an avid golfer.

Friends may visit with Ron’s family and friends from 4-7 pm on Wednesday, February 2, 2022, at Goodwin-Sievers Funeral Home, 524 Broadway, Vincennes, IN 47591. Ron’s funeral service will begin at 7:00 pm on Wednesday at the funeral home and Ron will be laid to rest in Mt. Calvary Cemetery at a date to be determined. There also will be a celebration of Life Service held at the Harmony Society at a date to be determined. Memorial Contributions may be made to The Knox County Humane Society, 405 Main St., Vincennes, IN 47591. Online memories may be shared with Ron’s family and friends at www.goodwinsievers.com. Goodwin-Sievers Funeral Home is privileged and honored to be entrusted with the care of Ron.