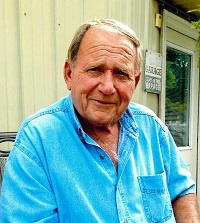 Born in: Fountain Green, IL
Resided in: Vincennes, IN

Ron is a member of Wabash Community Church and served his country in the United States Army Reserve. Ron worked in many capacities over the course of his life. He was an orderly at Good Samaritan Hospital, worked at Blackford Glass, drove a truck for Ligon Trucking, and owned and operated the Boat Shop, and then drove for Wilkins Trucking. After retirement Ron enjoyed mowing yards and removing snow for his neighbors. He also is a member of the Moose Lodge, American Legion, 40 et 8, Fraternal Order of Police as an associate member and the Vincennes Boat Club. Ron also enjoyed cooking, grilling, smoking food, being on the river fishing, and traveling just to see the sites.

Survivors include his wife, Linda Carey of Vincennes; his children, daughter, Connie Barekman of Vincennes, son, Dean Carey and his wife Cherie of Lawrenceville, IL; his grandchildren, Paul Nicholas Barekman and his wife Jamie, Renee Barekman Leydet and her husband Mike, Justine Carey, Blaize Kimmel, Zackary Carey; and his great grandchildren, Hope Leydet, Daniel Leydet, and Ellie Lang-Barekman. Ron is also survived by a lifelong friend he considered a brother, Bruce Aiken. Ron is preceded in death by his parents, Everette and Madge Carey and his brother, Robert Carey