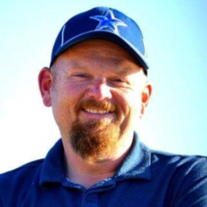 Robert William Phalen, 47, of Glasgow, died Tuesday, January 14, 2020 at his residence. He was born in Fort Benning, GA on May 12, 1972 to the late William Charles Phalen and Alecia Reagan Phalen who survives. Robert had attended the University of Central Florida. He was employed as a lawn care technician with Tru-Green Lawn Care service in Bowling Green. In addition to his mother he is survived by his wife, Erica Phalen of Glasgow; step children, Dylan Harrison (Kaitlyn), Cheyenne Harrison (Josh), Gabriel Harrison, Christian Nelson and Elijah Nelson all of Glasgow; sisters, Dawn Marie Winter (Craig) of Lafayette, TN, four special sisters, Lacey Harper of Glasgow, Kimberly Nesbitt of Fayetteville, NC, Anji Lignon of Colorado Springs, CO and Sandra Harrington Hornbeek of Lyles, TN; three special brothers, Michael Liles of Fayetteville, NC, Chris Meeks of Glasgow and Steffey of Glasgow; 2 uncles, Jesse & Jerry Reagan; two nephews, Austin Winter of Norfolk, VA and Ty Winter of Cave City. Several other nieces and nephews also survive. In addition to his father, he is preceded in death by a brother, Charles Phalen; maternal grandparents, Leonard and Ruth Reagan; paternal grandparents, Roy and Jane Phalen. Funeral services will 3:00pm Thursday, January 16th at the A.F. Crow & Son Funeral Home. Visitation will be on Thursday from 11:00am until time for services at the funeral home. Cremation will follow the service. In lieu of flowers, the family request, that a donation may be made to the funeral home to help the family with funeral expenses.