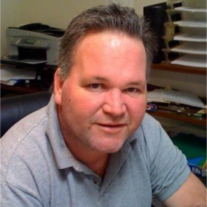 Robert Wayne Priest, 57, of Owensboro, Kentucky passed away Friday, January 31, 2020 at Owensboro Health Regional Hospital. He was born in Clarkson, Kentucky on August 18, 1962 to the late Joseph Stoy Priest and to Mary Alma Wright Renfrow. Robert served in the United States Army, and was a retired Truck Driver. He was a UK sports fan and enjoyed collecting Coca-Cola and UK memorabilia. Robert’s grandchildren were his life. Along with his father, Robert is preceded in death by his brother, Richard Dale Priest, and his step-mother, Sandra Priest. Along with his mother and stepfather, James “Cooney” Renfrow, Robert is survived by his son, Jeff Hodges of Owensboro, and his adopted daughter, Zoey Argueta, his grandchildren, Naylee, Keenan, Daisy, and Lily; his siblings, Patricia (Bill) Priest of Owensboro, Donna (Sammy) Aubrey, of Hardinsburg, Mary Jo (Terry) Dant, Joseph (Patty) Priest, Chris (Laura) Priest, all of Owensboro, Sissy (Mike) Harrison of Cromwell, and Phyllis Jeffries of Horse Branch. Visitation will be 3:00 pm to 7:00 pm Tuesday, February 4, 2020 at Haley McGinnis Funeral Home & Crematory. Expressions of sympathy may take the form of donations to the Robert Wayne Priest Memorial Fund; c/o Haley McGinnis Funeral Home & Crematory; 519 Locust Street; Owensboro, Kentucky 42301. Envelopes will be available at the funeral home. The family would like to extend a special thank you to the staff and doctors at DaVita Dialysis, especially Dr. Mahendra Maru for their years of care. Haley McGinnis Funeral Home & Crematory is both honored and privileged to be entrusted with the care of Mr. Priest. Share your messages of condolence with the family of Robert Wayne Priest at www.haleymcginnis.com