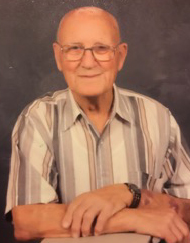 Bob attended English School and English Baptist Church. He was a US Air Force Veteran.

Bob retired from Alcoa in Warrick County, Indiana. He enjoyed attending and supporting his church, Ridgewood Baptist Church and was a remarkable mechanic.

Proceeded in death: by his parents, his wife of 43 years-Bess Weeks Garrett, his brother-John Marion Garrett and his sister-Lena Agnes Hanlon.

Much Gratitude to Tina Gerteisen and Gerfriede Frantz for being such a Blessing to Bob and our family especially during his declining years. Thank you to the staff of the Owensboro Center Nursing Home for their consistent care of Bob.

Haley McGinnis Funeral Home & Crematory is both honored and privileged to be entrusted with the care of Mr. Garrett. Share your messages of condolence with the family of Robert Eugene Garrett and sign his virtual guestbook by going to www.haleymcginnis.com.