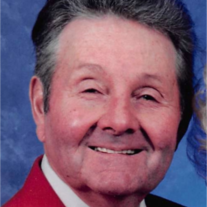 Robert “Bob” Calvin Perkins, 88, of Glasgow, passed away Saturday, February 8, 2020 at the NHC Healthcare facility in Glasgow. He was born in Barren County, May 20, 1931, to the late Clifton Pritchard Perkins and the late Mallie Wells Perkins. Bob was a lifetime farmer. He was a U.S. Air Force Veteran during the Korean war era and had served in Germany in 1953-1954. Mr. Perkins was charter member of the South Barren Volunteer Fire Department for nearly 30 years and once served as a board member for the fire department. For over 60 years, he has been a member of the Old Zion Methodist Church. Survivors include his wife, Anita Gray Perkins of Glasgow; one daughter, Debbie Hartman (Kenny) of White House, TN; one son, John Perkins (Jo) of Glasgow; four grandchildren, Sarah Maria Marshall (Dean) of Riviera Beach, FL, Robbie Perkins (Kara) of Edmonton, Clifton Calvin Perkins (Kasandra) of Glasgow and David Wayne Perkins of Glasgow; five step grandchildren; 5 great grandchildren; 9 step great grandchildren; several nieces and nephews also survive. In addition to his parents, he is preceded in death by four brothers, Stanley, George, Mitchell and Roger Perkins; one sister, Velma Snyder. A Celebration of life for Bob Perkins, will be 2:00pm Tuesday, February 11, 2020 at the A.F. Crow & Son Funeral Home with burial in the Old Zion Cemetery. Military honors provided by the DAV Chapter #20. Visitation will be on Monday from 3:00pm until 8:00pm and on Tuesday until time for service at the funeral home. In lieu of flowers the family request that a memorial contribution be made to the Old Zion Cemetery Fund; Donation envelopes may be picked up at the funeral home.