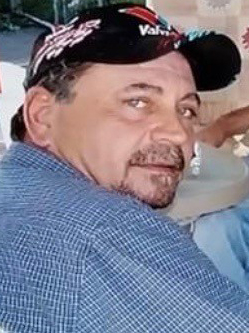 Richard Carol Hawkins, 61, of Owensboro passed away Saturday August, 15, 2020 at Owensboro Health Regional Hospital. He was born in Daviess County on February 23, 1959 to Mary Howard Hawkins and the late J.D. Hawkins. Richard was retired from Swedish Match where he worked as a Mixer for over 17 years. He was a member of Precious Blood Catholic Church. Richard enjoyed woodworking, working on cars, and fishing. He was a jack of all trades and truly enjoyed spending time with his children.
Along with his father, Richard is preceded in death by his sister, Monica Adkisson; and his brother, Steve Hawkins.
Along with his mother, Richard is survived by his wife, Liz Connor Hawkins; his children, Matt (Shelley) Hawkins, Rischelle (Michael) Hawkins, Heather Hawkins, and Zach (Jenna) Henry; his grandchildren, Jonathan, Isaac, Leighton, and Braelyn; his siblings, Ada (Mike) Calloway, Gail Koger, Jeff Hawkins, and Mark (Craig) Hawkins.
A Private burial will take place at St. Anthony Cemetery.
Haley McGinnis Funeral Home & Crematory is both honored and privileged to be entrusted with the care of Mr. Hawkins. Share your messages of condolence with the family of Richard Carol Hawkins and sign his virtual guest book by going to www.haleymcginnis.com.