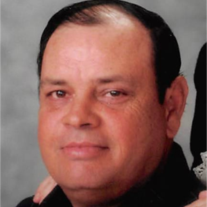 Ray Jewell Parker, 67, of Cave City, KY died, February, 23, 2020 at his residence. Born in Glasgow, KY he was the son of the late Jewell Ray Parker and Louise Witcher Houchens, he was retired from Ken-Dec Industries and was a member of Little Hope Baptist Church. Survivors include his wife of 45 years; Dorothy Sturgeon Parker; two sons, Chad Anthony Parker and Bradley Jewell Parker both of Cave City; and Whitney Gedda who called him “Ray Ray”; one special aunt, Jewel Lindsey “Momma Jewell”; one uncle, Edgar Witcher; one niece, Lisa Sturgeon who called him Poppa. Several nieces, nephews and cousins also survive. In addition to his parents he was preceded in death by his mother-in-law, Mildred Sturgeon and a sister Linda Slagle. Funeral services for Mr. Parker will be held 1:00 PM Thursday, February 27, 2020 at the A. F. Crow & Son Funeral Home with burial in the Campground Cemetery at Cave City. Visitation will be on Wednesday, February 26th 3:00 PM until 8:00 PM and on Thursday, morning until time for services. Expressions of sympathy can be made in the form of donations to the funeral home to help family with final expenses. A. F. Crow & Son is both honored and privileged to be entrusted with the care of Ray Jewell Parker. Share your condolence with the family of Ray Jewell at www.crowfuneralhome.com