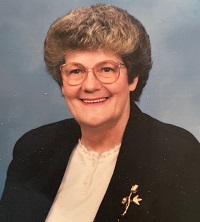 Phyllis Elizabeth Bouvy Morgan met her Lord passing away peacefully on Sunday, March 20, 2022. She was born on March 12, 1930, to Louis J. and Theresa (Stangle) Bouvy.

She is preceded in death by her parents and her husband of 61 years Richard L. Morgan. Phyllis was one of eleven children. She is a 1948 graduate of the Academy of Immaculate Conception in Ferdinand, Indiana.

Phyllis spent many years working at Vincennes University assisting Dr. Issac Beckes and Dr. Phillip Summers in an administrative capacity. She also had the privilege of working with the Generations program at the university.

A long-time member of Ridgecrest Baptist Church in Vincennes, she served as a Sunday school teacher.

Being the strong woman she was, she battled and survived breast cancer, twice.

During her life, she enjoyed boating on the river and traveling with Dick. Birdwatching, church activities, making over her cat Callie, and helping her husband with business adventures kept her happy and fulfilled.

While residing at Colonial Assisted Living, Phyllis had the opportunity to forge new friendships and even became “Bingo Champion” by winning more quarters than any other resident bingo player.

A sincere thank you to the staff of Good Samaritan Hospital and the C/D wing of Willow Manor Nursing facility.

Services for Phyllis will be held Thursday, March 24, 2022, at 11:00 am with Pastor Walker Hatton officiating at the Goodwin-Sievers Funeral Home in Vincennes. In lieu of flowers, donations can be made to the Vincennes Pet Port. Goodwin-Sievers funeral home is privileged and honored to be entrusted with the care of Phyllis.

The family greatly appreciates donations made to these charities in Phyllis E Morgan 's name.