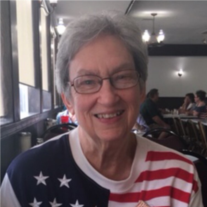 Phyllis Annette Marr, age 79, of Glasgow, died Tuesday, January 28, 2020 in Louisville. Born in Glasgow on October 17, 1940, she was the daughter of the late Roger Bennett and the late Lovelle (Lewis) Bennett. Phyllis was previously employed at Sav-A-Lot but more recently was a homemaker. She was a member of Beech Grove Baptist Church. She is survived by two daughters, Susan Annette Wheeler (Tim), Glasgow and Shanda Marr, Glasgow; one sister, Betty Withrow, Glasgow; two grandchildren, Caleb Marr and Candace Simmons. In addition to her parents, she was preceded in death by her husband, Douglas Ray Marr. Funeral services will be held 12:00 PM, Saturday, February 1 at A.F. Crow and Son Funeral Home with Burial in the Glasgow Municipal Cemetery. Visitation will be Friday, January 31 from 4:00 PM until 8:00 PM and Saturday morning until time for services at the funeral home. In lieu of flowers, the family request donation be made to Beech Grove Baptist Church. A.F. Crow & Son is both honored and privileged to be entrusted with the care of Ms Marr. Share your message of condolence with the family of Phyllis Marr at www.crowfuneralhome.com.