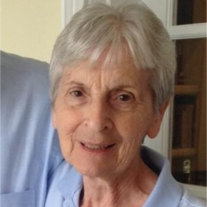 Peggie Annette Donoho Marsh, 82, of Glasgow, died Sunday, January 19, 2020 at the NHC Healthcare facility in Glasgow. She was born in Macon County, TN, September 4, 1937, to the late Thomas Edison Donoho and the late Christine Inez Ramsey. Peggie Marsh wore many hats in her lifetime. Early in her married life she was a farm girl and worked many days in the tobacco fields, she also worked two or more jobs while her husband John finished his undergrad work at WKU and also while he was in medical school at the University of Louisville. She worked at the campus switchboard, then she would walk downtown on the square to work her job at Norman’s department store. She had worked at Kraft’s Food & was a department manager at J.C. Penny’s. Later, became office manager at her husband office, Dr. John Marsh. Peggie enjoyed being a fan of the KY Wildcats. She loved her church and church family, First United Methodist Church, where she was a loyal and active member since 1974. She loved music as she sang in the church choir, she was a founder of the Kids Hope program and a faith meal member at her church. In addition to her parents, she is preceded death by her husband, Dr John Marsh, whom she married March 20, 1954. Survivors include three daughters, Dr Karen Small (Sam) of Glasgow, Joy Norris (Steve) of Glasgow and Pam Marsh-Keightley (Greg) of Bowling Green; one son Kevin Marsh (Connie) of Cave City; grandchildren, Adam Small (Leslie) of Versailles, KY, Drew Keightley (Alexis) of Norco, LA, Jane Marsh of Lexington, KY, Samantha Norris (Thomas Grubbs) of Glasgow, Jon Keightley (Lindsay) of Cave City, Rachel Daugherty (Jackson) of Bowling Green, KY, Olivia Marsh of Frankfort, KY and Lane Norris of Glasgow; great grandchildren, Jon Witt Keightley, James Keightley, Judah Daugherty and Halle Small; one sister, Linda Crutchfield of Plano, TX.; special friend, Pat “the brother” Bradley. Funeral services will be 11:00am Thursday, January 23rd at the First United Methodist Church with burial in the Hiseville Cemetery. Visitation will be at the First United Methodist Church on Wednesday, from 4:00pm until 8:00pm and on Thursday, from 9:00am until time for services at the church. In lieu of flowers, a donation may be made to the First United Methodist Church Kids Hope; First United Methodist Church Faith Meals; 500 S. Green Street, Glasgow, KY 42141 or Community Medical, 204 N. Race Street, Glasgow, KY 42141. A.F. Crow & Son Funeral Home is both honored and privileged to be entrusted with the care of Peggie Marsh. Please share your condolences with the family of Mrs. Marsh at www.crowfuneralhome.com.