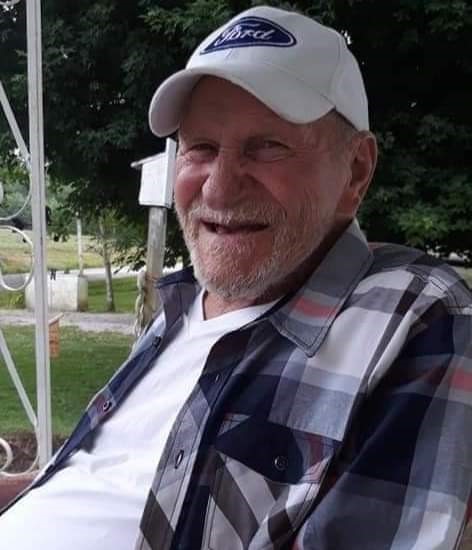 Paul Petty, age 85 of Leitchfield, passed away Friday, December 11th 2020 at his residence surrounded by his loving family. He was born October 10th 1935 in Big Clifty, KY, the son of Oliver & Ressie Horn Petty.

Pretty Paul Petty, as we knew him, never met a stranger, never spent any wooden nickels, and never killed any dead snakes. You could find him pouring concrete alongside his grandson until the end. The work filled him with pride and no doubt added many happy, productive years to his life.

It goes without saying that Paul was a family man who loved his two daughters, his five grandchildren, and his nine great-grandchildren. But, it was this that Paul was known for: being pretty, the Paul Petty Twist, being everyone’s favorite uncle, and growing tomatoes that wouldn’t fit in a five-gallon bucket.

Paul enjoyed the small things in life: drinking coffee at McDonald’s with the ladies, watching Wheel of Fortune with family, and his daily honey bun. Unfortunately, his diabetes made it difficult to indulge his sweet tooth later in life. But, he found a satisfying alternative in asking someone if they liked ice cream only to respond with “Well, we don’t have any.” It would be a great error on my part if I didn’t also mention his love of mustard and homegrown tomatoes.

Paul was truly a man of the land: gardening, mushroom and ginseng foraging, hunting, and fishing. Interests shaped at a young age by the creeks and valleys of Petty Blue Hole. He never failed to impart the wisdom he gathered from home onto others, teaching his daughters how to drink spring water from a leaf, that mayapples meant mushrooms, and how to catch minnows.

We want to ask that you help us honor Paul’s memory. Next time you sow your garden, sow an extra tomato plant for him. Next time you dance, do the Paul Petty Twist. When you’re at a loss for words, holler a “Flicky dicky nutcracker.” When you find yourself reminiscing, remember what a remarkable man he was.

Paul lived 85 fulfilling years, yet his end came too soon for anyone who had the pleasure of knowing him. Leaving us asking him the same question he would often ask us “What’s your hurry?”

We imagine he’s driving off in his little green S-10, warning anyone going faster than him that they’ll be turned upside down in a ditch on down the road. I’m certain a few fishing poles are peeking over the tailgate and a diet Pepsi in his cup holder. Don’t worry Paul, we’ll catch up. In the meantime, we’ll be missing you dearly.

Other than his parents, he was preceded in death by his wife, Catherine Petty, four brothers, Wilbur, Ivan, Henry, & Wavie Petty, and two sisters, Nell Chambers & Faye Risner.

Funeral services will be held at 1:00 p.m., Wednesday (Dec 16), at the Watson & Hunt Funeral Home in Leitchfield. Burial will be in the Cedar Hill Cemetery in Big Clifty. Visitation will be held from 4:00 – 8:00 p.m., Tuesday and from 9:00 a.m. until service time Wednesday at the funeral home.

All those who wish to honor and remember Mr. Petty in person at the funeral home are required to wear a mask or face covering while inside the funeral home for the safety of all those in attendance.

Watson & Hunt Funeral Home is both honored and privileged to be entrusted with the care of Mr. Petty. Share your messages of condolence with the family of Paul Petty in the virtual guestbook below