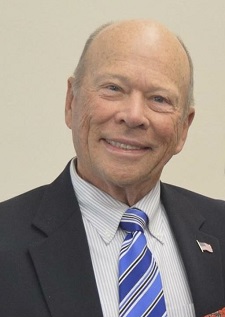 A 1960 graduate of Monroe City High School, P.R. went on to receive his associates degree in Business Administration from Vincennes University, his bachelors degree in Finance and Economics from Indiana State University and a graduate degree from the Stonier School of Banking at Rutgers University.

P.R.’s professional career included serving as a Senior Bank Examiner for the Indiana Department of Financial Institutions, and as an Auditor for Geo S. Olive & Co., both in Indianapolis before returning to Vincennes in 1969 to begin his career at Security Bank & Trust Company. P.R. began as an auditor and ultimately followed in his father’s footsteps, being named President and CEO in 1994. His dad, Paul J. Sweeney, was the 4th president of Security Bank, and P.R. was the 10th and last president. P.R. remained in this position at Security Bank, and later Old National Bancorp, until his retirement on August 1, 2001.

P.R. conscientiously provided his time and talent and served on numerous civic, community and state boards. It would be impossible to list them all. A few notable appointments included serving as a member of the Board of Trustees of Vincennes University, President of the Knox County Hospital Association, Trustee of the Indiana Historical Society and the Indiana State Museum, Director of the Vincennes University Foundation, an Elder in the Indiana Presbyterian Church, President of the Vincennes Kiwanis Club, and a Board Member for the Indiana Department of Financial Institutions.

Though P.R. took pride in every appointment he received, there were four that P.R. was probably most proud of; being the self-appointed Mayor of Verne, President of the Verne Society, membership in the Bicycle Club and being one of only two individuals to hold an office in the RPC.

P.R. devoted countless hours to making his community a better place, but his true love and devotion was to his family. On November 7, 1964, he married his high school classmate and college sweetheart, Shirley V. (Steffey) Sweeney and together they had 4 children, Shannon, Paulette, Chad and Jamie. P.R. and Shirley were married for 32 years before she was called home on November 14, 1996.

On February 26, 2000, P.R. was blessed with a second marriage when he married Phyllis L. (Thomas) Sweeney and P.R. gained two additional children, Derek and Danielle. After 22 years of marriage, P.R. was called to Heaven on August 1, 2022, surrounded by his family.

P.R. distinguished himself in his profession and his community, but most importantly he was a faithful son and brother, a devoted husband, a loving father and a man of Christ. It is these qualities that he will be remembered for and will live on in the legacies he leaves behind.

Friends may visit with the Sweeney family from 4 – 8 pm on Friday, August 5, 2022, at Goodwin-Sievers Funeral Home, 524 Broadway Street, Vincennes, Indiana. The funeral service will be held Saturday, August 6, 2022 at 10:00 am at the Indiana Presbyterian Church, 2431 South Lower Indiana Road, Vincennes, Indiana. Pastor Frank Harmon will be officiating. In lieu of flowers, the family has asked that donations be made in P.R.’s memory to Indiana Presbyterian Church or to an institution supporting Alzheimer’s Disease research.  Goodwin-Sievers Funeral Home is honored and privileged to be entrusted with the care of P.R. and his family.