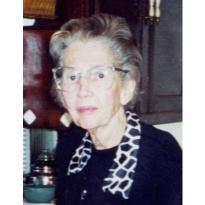 Myrtle M. Geary, 85, of 119 W. 17th Street died on December 30, 2003 at Owensboro Medical Health Systems. She was born on March 8, 1918 in Knottsville, Kentucky to William Miles and Dale Mattingly, she was a member of St. Joseph and Paul Catholic Church, retired from General Electric after 35 years of service as a group leader. She enjoyed shopping, her pet, Gismo and her family. Preceeding her in death was her husband, Ova Geary in 1995 and a son, Brent Geary in 1964. Surviving is a son, Steve of Owensboro, two daughters, Judi K. Cornell and Connie S. Kennedy both of Owensboro, grandchildren, Amber Taylor, Hayley Miller, Jarrod Kennedy all of Owensboro, and a brother, George Miles.