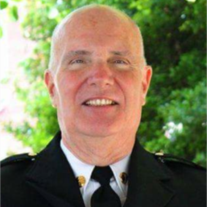 Michael Timothy Swift, 66, of Glasgow died unexpectedly Monday, March 6, 2017 at T. J. Samson Community Hospital. Born in Louisville Oct. 17, 1950, he was the son of the late Timothy and Margaret Swift. He was also preceded in death by his wife in 2012, Sherryl Ann Swift. Mike graduated from DeSales High School in 1968 and was awarded a scholarship to attend Western Kentucky University where he received his Bachelor’s degree in Science and Master’s degree in the Arts. He was an athletic trainer for WKU’s sports teams and was known affectionately by players and coaches as “Gentle Ben”. After completing his Master’s degree in 1974, Mike worked for the Bowling Green “City/County” Hospital Ambulance Service and Johnson-Vaughn Funeral Home. On December 10, 1974, he was hired by Barren County Judge Executive Dale Burchett to form and run as director, the Barren County Emergency Medical Services. Mike lead the service for almost 42 years, retiring August 31, 2016. He also was elected and served as Barren Coroner from 1989 until August 31, 2016. He had received many awards and recognitions through the years and served locally and statewide for the betterment of emergency services. He was Santa to hundreds of children and adults and was G Daddy to his grandchildren. South Green Elementary school named him the first, First Responder of the Year and he had served as the president Kentucky Ambulance Providers Association. He is survived by 5 children, Schelly Vance of Glasgow, Beth Walden (J.D.) of Glasgow, Johnny Vance (Laura) of Smiths Grove, Jamie Swift (Faith) of Glasgow and Jason Swift of Tennessee; 5 grandchildren Ben Payne, Jesse Payne, Mary Kate Vance, Grady Vance, Everly Swift and baby girl Swift due in April. He is also survived by 1 brother David Swift (Pam) of Shepherdsville; a sister-in-law Lou Ellan Carpenter of Hiseville; brother-in-law Charles Boston of Danville and a special friend, Lisa Simpson Strange. Funeral services will be 2:00 PM Friday, March 10th at the Glasgow Baptist Church with burial in the Glasgow Municipal Cemetery. Visitation will be at Glasgow Baptist Church beginning at 12:00 Thursday and continuing Friday morning from 9:00 AM until time for the service. A. F. Crow & Son Funeral Home is in charge of arrangements. Expressions of sympathy may be made to the Barren Co. EMS, P.O.Box 304, Glasgow, KY 42142 or the American Cancer Society or the American Heart Assn.