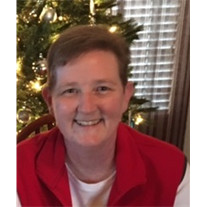 C. Melissa (Croghan) Hohimer, 50, of Beaver Dam, passed away Tuesday, March 7th, 2017 at the U of L Hospital. She was born on Saturday, October 15th, 1966 in Leitchfield, the daughter of Richard and Clara Mae (Mudd) Croghan. Melissa was a member of Pleasant Union Church. She was a certified EMT and a first responder at Daicel Safety Systems of America where she worked. Melissa was the first mascot at Southern Elementary School in Ohio County and was also their former site-based counselor. She loved to bowl, play softball, go fishing and watch U of L basketball. Melissa is survived by her husband of almost 27 years, Ricky W. Hohimer; her son, Isaac Riley Hohimer and daughter, Lindzey Marie Hohimer all of Beaver Dam; her parents, Richard and Clara Mae Croghan of Caneyville; one brother, Kevin Croghan (Amy) of Bowling Green; one nephew, Ty Croghan and one niece, Madi Croghan both of Bowling Green; her father and mother-in-law, James and Cindy Hohimer of Beaver Dam; four brothers-in-law and several nephews and nieces. She is preceded in death by her maternal grandparents, Elza and Mary Mudd and also her paternal grandparents, Herman and Ethel Croghan.Funeral services will be Sunday, March 12th at 2:00 pm at the Dermitt-Joyce Funeral Home in Caneyville. Bro William Dodson will be officiating. Burial will be in the Wilson Cemetery.Friends may call at the Dermitt-Joyce Funeral Home in Caneyville Friday after 4:00 pm, Saturday from 9:00 am until 9:00 pm and Sunday from 9 am until time of service.In Lieu of flowers the family requests donations be made to Team Mudd with Relay For Life.