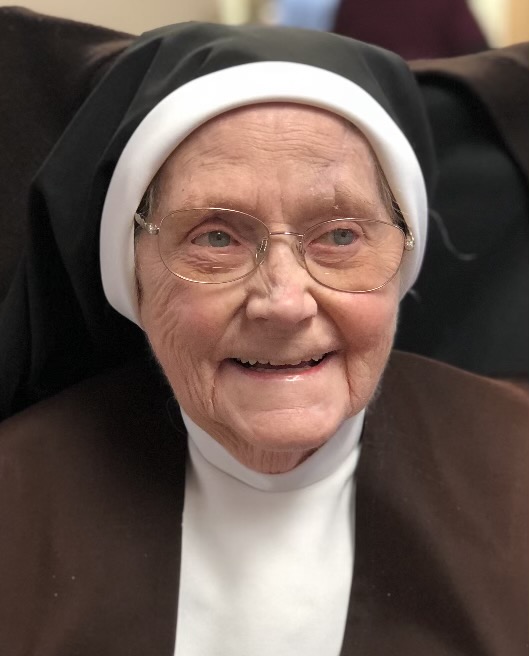 Sister Mary Therese (Esselman), Carmelite Sister of the Divine Heart of Jesus, 96, of Owensboro, peacefully passed away April 10,2021 at Carmel Home.
She was born January 9, 1925 on a large farm, in Hartford, Wisconsin, where Sister Mary Therese was the 7th child in a family of six boys and four girls born to Rosella (Kelly) and Louis Esselman. Their home was a normal one, where love, health and sickness, fun and music, and also work could be found. It was also a holy family where all prayed daily, morning and night prayers, and the rosary. As a farmer’s daughter, Sister experienced on-the-job-training in driving the tractor and cultivator; feeding the pigs and chickens, milking the cows, harnessing the horses and all other chores in between. However, work did not suppress education. The children received a Catholic, parochial and high school education.

Both parents were dedicated secular members of the Discalced Carmelite Order. Since their homestead was six or seven miles from Holy Hill, in Hubertus, Wisconsin, the family was very familiar with, and often visited the Carmelite Friars’ Monastery and their Shrine to Our Lady, Help of Christians there (since, elevated to a Basilica).
In its own time, sorrow struck the happy family, with the death of their mother at the age of 48, with 7 children still at home. One son had entered the Brothers of Mary in St. Louis, Brother Francis, who taught at a Mission in Lima, Peru. One by one the nest emptied, as twos sons entered the Carmelite Monastery: Holy Hill – Father Herman, and Brother Mark. With a very reduced but united team, their father continued to guide and rear his family. A daughter, Angela, joined a Franciscan convent. In 1942, Sr. Mary Therese joined the Carmelite Sisters, DCJ in Milwaukee. She made her First Profession December 8, 1943. On the same day that Sr. Mary Therese pronounced her Perpetual Vows, December 8, 1948, in Milwaukee, her Dad made his Vows in Secular Order of Discalced Carmelites, at Holy Hill in Hubertus, Wisconsin.
When all had followed their chosen paths, Louis Esselman sold the farm and entered the Carmelite Monastery at Holy Hill, taking the name Brother Joseph of the Infant Jesus of Prague. There he lived as a Carmelite Brother until the Lord called him ‘Home’ in 1960, a victim of cancer, as were his wife and nine of their children.
In Carmel of the Divine Heart of Jesus, Sister Mary Therese served in Wisconsin, Michigan, Missouri, Kentucky, Canada, and Iceland where she was co-founder of a Day Care Home. She served for many years as the cook for the Sisters and the Residents, gardener, seamstress, Administrator, and Local Superior. She also drove boxes and boxes of donations to Nicaragua. In 1962, she was transferred to Carmel Home from where she attended Western Kentucky University in Bowling Green, KY and earned a B.S. Degree in Health Care Administration, and Dietetics. After serving in Kenosha, Wisconsin, Sister retired in Carmel Home in 2013. With some of the farm still in her, she always found an unwanted weed in a flower bed. As a Resident Visitor, and former organist, she carried a song in her heart and can be found on any day, with Residents, lifting their hearts with a song, and music from her viola. She loved being with our Residents. Sister was very independent until June 2018; Sister had a bad fall where she broke her right leg and left wrist. She never fully recovered from that fall. After three months of being in the hospital and two nursing homes, Sister was finally moved to our Carmel Home Infirmary in October 2018 just in time to celebrate her 75th Jubilee of Religious Life in our Carmel Home Chapel. In November of 2020, Sister had Covid-19 and steadily declined. On her better days she attended Holy Mass. Sister Mary Therese, the last living member of her immediate family, spent many hours each day in the Presence of her first Love, Jesus, in the Blessed Sacrament, in our Chapel of Adoration.

Private Services will be held Monday, April 12, 2021 in the Chapel of the Carmel Home. Burial will follow in Holy Cross Cemetery in Milwaukee, Wisconsin.
Expressions of sympathy may be made in Sister Mary Therese’s name in the form of donations to Carmel Home, 2501 Old Hartford Road, Owensboro, KY 42303.

Haley McGinnis Funeral Home & Crematory is both honored and privileged to be entrusted with the care of Sister Mary Therese. Share your messages of condolence with the family by signing her Tribute Wall.