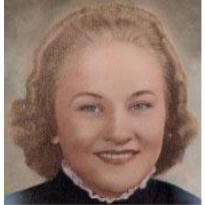 Mary Edith Osborne Allen, 86, of 1411 Parrish Court, Owensboro, devoted wife and mother, went home to be with Jesus at 1:22am. on Thursday, August 5, 2004 at Owensboro Medical Health Systems. She was born on July 4, 1918 in Owensboro to the late William Charles and Mary Eva Mason Osborne, she was Catholic and a charter member of St. Pius X Parish, a longtime member of St. Stephen's Parish and a member of the Altar Sodality. She was preceded in death by her husband Iven Allen, Jr., February 6, 1945, who was declared missing in action, and later deceased, following the sinking of his ship, the S.S. Peter Silvester in the Indiana Ocean off the coast of Perth, Australia. She was also preceded in death by her son, William Iven Allen on March 27, 1942 as well as her brothers, Robert Mason Osborne, William Charles Osborne, Jr., Joseph Clifton Osborne, John Elliot Osborne and sisters, Margaret Ann Osborne and Nanette Elizabeth Isbell. Mrs. Allen loved to travel, camping, motorcycling, sewing, gardening, pets and to be with family and friends. She loved all that she met and enjoyed their hugs and embraces. She was devoted to Mary, The Mother Of God and was a regular viewer of EWTN. Survivors include her son, Larry Joseph Allen of Owensboro, two sisters, Betty Marie Sullivan of Cincinnati, Ohio and Virginia Louise Glahn of Owensboro, Ky. She had several nieces and nephews and cousins, whom she dearly loved and was known as 'Mert' or 'Aunt Mert' to them. Visitation is at Haley-McGinnis Funeral Home from 2:00 to 8:00pm. Saturday with prayers at 6:30pm. and from 10:00 until 11:30am. on Sunday. Funeral services will be conducted at the Blessed Sacrament Chapel, 602 Sycamore Street, on Sunday, August 8, 2004 at 12:00pm.noon with interment at Resurrection Cemetery. The family requests that expressions of sympathy be made to Blessed Sacrament Chapel, 602 Sycamore St. Owensboro, Ky. 42301.