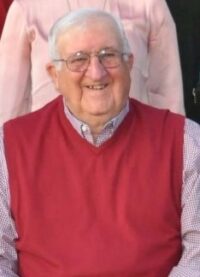 Born in: Iona, IN
Resided in: Vincennes, IN

Marvis was a 1958 graduate of Decker High School and went on to be employed with Indiana Bell telephone in 1965, later becoming AT&T. He retired from there with many memories of work with fellows who became best friends. The “AT&T Group” would meet every Tuesday and Thursday mornings for coffee and stories. Marvis was always a farmer at heart, raised on his family farm near Iona, and very proud of his service with the United States Army as a military policeman. A flag never passed in front of him without his standing and saluting. If his family or friends needed something built, remodeled, or fixed, Marvis was there for the “projects”. He also donated many hours of time and talent to his churches, never complaining, working hard. Marvis bought and remodeled old homes into rental housing for his community, while teaching his sons the art of dry-walling, wiring, and other carpenter skills.

He was a long time Board Member and coach at the Vincennes Cub League, drafted by his father-in-law, Gail Catt, and friend Joe Bilskie. They built two new diamonds and the first concession stand. Marvis coached his sons in Cub League and Colt League. When the boys began high school sports, Marvis was in the bleachers, or at the scorer’s bench-everyone remembers him at baseball games with the official book on his lap.

Marvis found enjoyment in many ways, but one of his family’s favorites was his talent for smoked turkeys, after days of brining, and ultimately, his famous turkey salad. He looked forward to his sons or friends needing a “project” fixed and was ready to load his pickup truck with tools and head their way. He also enjoyed euchre, poker, and rum. Marvis was also a CWA President and received the Brute Award from his church. He believed in stewardship and giving back to those in need.

Friends may visit with Marvis’ family from 5-8 pm on Friday, September 3, 2021, at St. John’s Catholic Church, 803 Main St., Vincennes, IN. A Mass of Christian Burial will be held at 10:00 am on Saturday, September 4, 2021, at St. John’s Catholic Church with Rev. Tony Ernst celebrating. Marvis will be laid to rest in Mt. Calvary Cemetery and the All-Weather Firing Squad will conduct military honors.  Marvis’ family would like to extend a special thank you to Good Samaritan Hospice for the compassionate and professional assistance during a very difficult time. The Lane family has requested contributions be made to Good Samaritan Hospice or the donor’s choice of a local church or charity.

The family greatly appreciates donations made to these charities in Marvis E. Lane 's name.

Donor's choice of a local Church or Charity