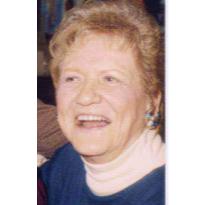 Margaret Corine Montgomery, 80, of 1914 South Griffith passed away on June 6, 2004 at Owensboro Medical Health Systems. She was born on January 8, 1924 in Ohio County, Kentucky to Cicero Bowlds an Vitula Burnette Bowlds. She retired from Owensboro Area Vocational School as a secretary. She enjoyed sewing, crafts and quilting. She was preceeded in death by her husband, Robert J. Rock Montgomery in 1997. Surviving is her daughter, Kay Powers of Owensboro, grandchildren, Tracy King and her husband David of Lexington, Mary A. 'Tony' Powers of Flordia and Prentiss Terry and her husband Brian of Flordia. Also surviving are 2 great grandchildren Shelby and Michael King of Lexington, a sister, Lorene Kizer of Flordia and several nieces and nephews.