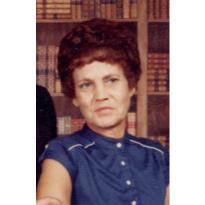 Mandy Waynick Stewart, 73, of 3308 Ridgewood St., passed away on Thursday, April 15, 2004 at her home. She was born on June 6, 1930 in Nashville, Tennessee to Earl and Nettie Schmitto Waynick; was employed by Moonlite BBQ as a cook; a member of Ridgewood Baptist Church and enjoyed her family. Preceeding her in death was her husband, Roy in 1981, and a son, Walter in 1991. Surviving is a son, Jimmy and daughter Linda Jennings both of Owensboro; grandchildren Lisa, Jimmy, Catina and Dallas and 4 great grandchildren. Also surviving are 3 brothers, Odell of Arizona, Jesse and Edward both of Michigan; 2 sisters, Pauline Poston of Kuttawa, KY and Joan Messer of Coco Beach, Flordia and several nieces and nephews. The family wish that expressions of sympathy take the form of donations to Ridgewood Baptist Church Missionary Fund, 800 Carter Road, Owensboro, Ky 42301.