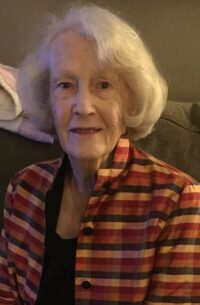 Born in: St. Petersburg, FL
Resided in: Vincennes, IN

Lida D. Kerlin passed away on November 2, 2021 at Good Samaritan Hospital. Lida, the daughter of James J. and Lucille (Sadler) Durham, was born on December 23, 1924 in St. Petersburg, FL. She married Dr. Richard Michael Kerlin in 1947. Mike preceded her in death in 1982.

Lida was a 1943 graduate of Sullivan High School and went on to her beloved Purdue University and graduated in 1947.  Following college, Lida worked at L.S. Ayres and the U.S. Department of Finance. Lida was a homemaker but furthered her career as the Reservation Manager at the Vincennes Executive Inn. A natural social butterfly, Lida enjoyed a stint as President of Tri Kappa and was an avid dog lover. Lida also enjoyed reading, playing Bridge, dancing, being around her family and friends, and was a sports aficionado.

Lida is preceded in death by her son, Richard M. Kerlin, Jr and survived by her daughters. Mary Eugenia “Gean” Townsley and her husband Chuck of Denver, CO and Clair Kerlin Smith and her husband Bryan of Brownsburg, IN. Lida has five grandchildren Steven, Emily, Michael, Alex, and Maddie; three great grandchildren, Maggie, Eli, and Isabel.

In lieu of flowers donations can be made in her name to Upper Indiana Presbyterian Church, The Sullivan County Humane Society, Good Samaritan Hospital Vincennes- Hospice Care, or a charitable organization of your choice.

Lida will be cremated. Her family will hold services Spring/Summer 2022- details pending. On line memories may be shared with Lida’s family and friends at www.goodwinsievers.com. Goodwin Sievers Funeral Home is honored to be entrusted with the care of Lida.

. Goodwin Sievers Funeral Home is honored to be entrusted with the care of Lida.