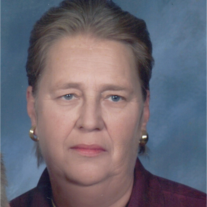 Laura N. “Bug” Marsch, 68, of Owensville, IN went to be with the Lord January 17, 2020. She was born April 24, 1951 in Georgia to the late James Daniel Cox and Susie (Howell) Cox. Laura worked at Red Spot for 30+ years as a plant chemist. She was known to speak her mind and always let people know exactly where they stood. Laura married the love of her life Eugene “Franklin” Marsch July 19, 1999. She loved her husband until his passing on December 2, 2018. Laura liked her flowers and cooking, and was known for being a giving person. She was a member of Holy Cross Catholic Church in Ft. Branch. Laura served as a Eucharistic Minister and felt it was a great honor to distribute communion. She also worked the dinners at church for many years. Laura was preceded in death by her parents; husband Eugene; six brothers and two sisters. She is survived by her sons William Joseph Cox and Christopher Shannon Gilbert; grandchildren Stephanie Gilbert, Amelia Cox, Edward Cox, Matthew Cox, Kaelen Snyder, and Colton Snyder; 1 great grandchild; brothers Earl Cox and George Cox. Holder’s Funeral Home is honored and privileged to be entrusted with the care of Mrs. Marsch. A Mass of Christian Burial will be held on Thursday, January 23, 2020 at Holy Cross Catholic Church in Fort Branch, IN at 11am with Fathers Christopher Droste and Luke Hassler as co-celebrants. Visitation will be held Wednesday at Holders Funeral Home in Owensville from 5p-7p and Thursday at Holy Cross from 10a-11a. Interment will be in Holy Cross Cemetery.