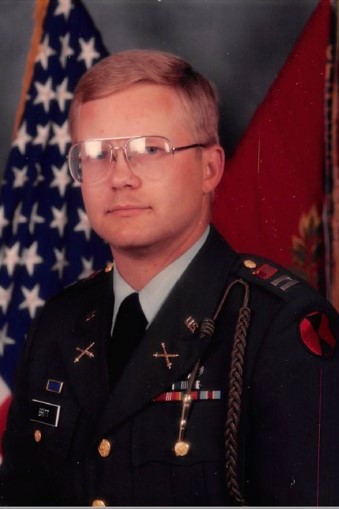 A native of Kentucky, Ken spent most of his life in the Hoosier state of Indiana before enlisting into the Army as an Infantry soldier in 1980. He received a US Army commission in the Field Artillery Branch through the Officer Candidate School program in 1982, and as the Distinguished Military Graduate accepted an early Regular Army appointment in 1984.

LTC(R) Britt served in all the traditional military assignments, commanding field artillery batteries with the 7th Infantry Division (Light) at Fort Ord, California and at Fort Sill Oklahoma before being selected to serve as an Assistant Professor of Military Science and Leadership Studies instructor at the Virginia Military Institute. Other assignments have included tours with the 10th Mountain Division in New York, two tours of duty in the 2nd Infantry Division in the Republic of Korea and an assignment with the US Army Recruiting Battalion in Nashville, Tennessee. LTC Britt served at the Pentagon on the Army Staff as the Deep Fires Team Chief within the G8’s Precision Strike Division until his retirement from the Army in 2005. Following his retirement, he went back to the Pentagon as a Senior Analyst for the Army Staff’s Force Development Directorate where he remained until this year.

Ken loved Soldiers and had a heart for service. Despite a busy schedule between work and his family business, he was active with the Field Artillery Association, Mount Hope Baptist Church, Ashburn, VA where he served as an Elder, and several other organizations supporting the Army and the National Defense. He served as the Vice Chair Emeritus of the National Defense Industrial Association (NDIA), a non-profit defense association and was the technical advisor to NDIA’s Precision Strike.

Most notably, Ken is the immediate past President of the Association of the United State Army (AUSA) Fairfax-Lee Chapter in Northern Virginia where he spent the last 14 years designing and executing programs to support the nearly 6,000 Soldiers, Civilians, wounded warriors and family members of the Chapter. His fundraising effort culminated in the awards of over 100 scholarships to members and their families. In 2018, Ken was the recipient of the coveted, AUSA “Exceptional Service in Support of National Defense” Award. The AUSA Fairfax Lee Chapter is proud to name their scholarship program the “LTC(R) Ken Britt Scholarship Program” in honor of the beloved Ken Britt.

The family respectfully requests that in lieu of Flowers, donations be sent to: