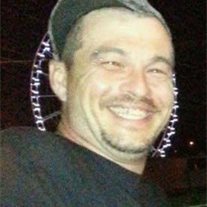 Johnny Ray Whobrey, Sr., age 39 of Clarkson passed away Saturday, May 26th 2018 at his residence. He was born April 23rd 1979 in Bowling Green, KY the son of Ernest & Doris Helen Stinnett Whobrey. He was saved at the age of 9 at Pleasant Valley Missionary Baptist Church.

In lieu of flowers, expressions of sympathy can be made in the form of donations to help with the funeral expenses.