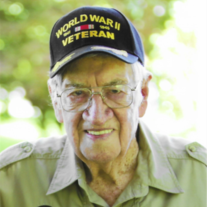 John Robert Miller, 96, of Glasgow died Tuesday, February 04, 2020 at the Medical Center of Bowling Green, KY. He was born May 28, 1923 in Barren County, the son of the late Robert Henry Miller and Martha Bacon Miller. He was married to the late Christine McGuire Miller for 67 years. Mr. Miller was a World War II Disabled Veteran serving 4 years in the Army Artillery with the rank of tech sergeant and stationed for over 3 years in the South Pacific, e.g. Australia and the islands of New Guinea, Philippines. He was the last surviving member of the 262 members of Battery B 237th. His unit received a citation for meritorious service. Mr. Miller was a member and a deacon of the Beech Grove Baptist Church, and former member of Union # 2 Baptist Church. John Robert owned and operated a family Grade A dairy farm for many years, as well as grain, corn, tobacco and Angus cattle farming. During his farming years he served on the ASCS Board of Committeemen for Barren County. He was also very active in local youth and 4-H activities and was elected State Chairman of the Kentucky 4-H Leadership Council. John Robert also owned and operated the small business Miller & Sons Oil Company, distributing Sinclair and ARCO oil and gas products to several south central Kentucky counties. He also worked as an office manager for Midstate Recycling until his retirement in 1990. Mr. Miller was elected to 3 terms as Magistrate on the Barren County Fiscal Court; and was the Barren County Republican Election Commissioner for over 26 years. Mr. Miller was awarded the Barren County Patriot Award in 2016 and was also inducted into the Barren County Schools Hall of Distinguished Honor. He is survived by 3 sons, Johnny “John” Miller (Karen) of Bowling Green, Lanny Miller (Neva Ray) of Glasgow and Donnie Miller (Lori) of Glasgow: 4 grandchildren, Sarah Bradley (Michael), Alan Miller (Amanda), Robert Miller (Allison) and Whitney Miller; 7 great grandchildren; Rosemary, Lucy and Walter Bradley; Eloise, Wallis, Harvey and Agnes Miller; a sister, Rebecca Brooks (Orval) of Glasgow; a sister-in-law, Elaine McGuire of Glasgow and several nieces, nephews, great nieces and great nephews. He is preceded in death by one sister, Mary Elizabeth Button. Funeral Services will be 2:00 PM, Friday, February 7 at the A. F. Crow & Son Funeral Home with burial in the Glasgow Municipal Cemetery. Visitation will be 12:00 PM until 8:00 PM Thursday and Friday morning until time for services. Military honors will be provided by DAV Kentucky Chapter 20 Glasgow/Barren County. Alternate expressions of sympathy may take the form of memorial contributions to Josh’s Friends, c/o Mike McGuire, a scholarship fund, 126 Hidden Forrest Rd, Glasgow, KY 42141. A.F. Crow & Son is both honored and privileged to be entrusted with the care of Mr. Miller. Share your message of condolence with the family of John Robert Miller at www.crowfuneralhome.com.