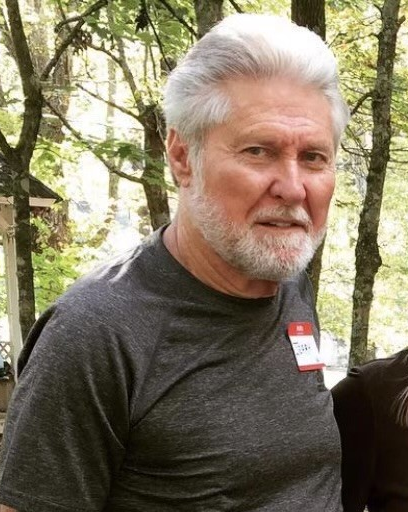 Jerry knew Jesus Christ as his Lord and Savior. He and Brenda spent nights in the Bible and prayer. If you needed prayer, they were the prayer warriors to go to. Brenda, his children, grandchildren, sisters, brothers, sisters and brothers in law, friends… were all around his bed when God called him home on Thursday, April 21st. Tears flooded the room as we said our last goodbyes. Parkinson’s led a quick rush of unfortunate events that whisked him away from us too soon – so unexpectedly.

Dad exercised every day, staying fit and healthy was very important to him to maintain a healthy life for years of love and support he would give to his family. He was a mechanic, and every job he ever held were within three blocks of his mom’s home. He’d go there every day for lunch and most often would stop at Brenda’s mom’s home (one house apart) and take his kids to lunch with him. But after years of working maintenance, at Baskin Robbins, Ford Tractor and lastly the Owensboro Board of Education bus garage, his body was showing wear when he retired at 62. The only reason he left any of his jobs before retirement was only due to their closing their doors. At age 66 he was diagnosed with Parkinson’s which he contracted while serving in the Army in Vietnam as a radio controller. He never let his ill health stop him. He went to the garage every day and worked. He was a man of many virtues, and patience was a strong one. At 76 years old, it may have taken him an hour to screw one screw in place, but his patience and zeal to fight what he referred to as his “condition” – Never Parkinson’s, just his “condition” – kept him going day after day after day… If you brushed by too close or nudged him in cheer, he’d say, “Now watch out. I have this condition you know.” And he’d smile and laugh, never a complaint, always made light of it in humor. Sometimes one of the kids would say “Come on Dad” and he’d laughingly respond, “I’m telling my feet, but they’re not listening”. Then he’d get ‘em moving – slowly but surely. As Parkinson’s worsened, Brenda would always watch him walk to garage and as he approached the garage door, he’d turn, smile and blow her a kiss which she returned her blown kiss with a big smile – precious moments – ordinary days moments – the best because they were always there… and will always be remembered.

He restored classic cars into street rods – 1932 Ford five-window coupe, 1934 Chevy, 1940 Ford Coupe to name a few. He still had a couple of his latest mint restorations in the garage, kept clean and safe under a “bubble”. He’d clean the engines with a long Q-tip. If they didn’t need fixin’, they could always use a fresh cleaning, keeping them road ready. Cars were his hobby but Love was his family – most precious to him. If he wasn’t working in the garage, he was picking up sticks across their 2-acre lot. But when night fell, you could find him and Brenda siting on the couch side by side watching movies, smiling at each other, petting each other’s leg. Yes, give him Brenda, his remotes, a little ice cream and he was happy. Sometimes they’d listen to music and at random times if a tune hit just right, they’d dance the slow dance of pure love. Brenda always said if all men were like my Jerry, you’d never hear of divorce. He and Brenda started dating right after his return from Vietnam. It was love at first sight and they’ve been inseparable ever since.

His HUGS were the strongest and longest EVER and he’d always return for more – never liked good-byes. He loved his brothers, sisters and mom. He was a strong family man. He was a protector always strong and in charge of all situations. He would be at your side in a moment’s notice, and whatever the situation – he remedied it! “You messin’ with family, you messin’ with me”. His two sons were special in their own ways. His first born, admittedly so, was not mechanically inclined – at all. Then came Jarod, a chip off the old mechanic block, toiled alongside his dad in the garage. Even sometimes when dad wasn’t there – like the young boy tearing down the lawnmower – ooops – but they put it back together, together. You need landscaping – Scott was the son to call on. Yes, there was a daughter, spoiled rotten Audra – spoiled by all, dad, brothers, mom… And still turned out to be the fantastic young woman she is today. Yes, daddy loved them all – stern when needed but always gentle. Growing up the kids remember always going to Opryland for vacation – other kids were off the beach – we were off to Opryland. It was a time before seatbelts and they’d lay in the back seat, the floor, wherever. Just load up and go. Remembered mom and dad driving dated vehicles but also remembered that they were always in tip-top condition because Dad was their mechanic, a very meticulous mechanic. So, if you looked under the hoods, they’d be best on the street!

Then came the grands – Papaw was always so playful with them. The girls would decorate his face and fill in his arm tattoos with washable markers, roll his hair… the boys rolled their hot wheels into the baseboard, stuck coloring pages down the hall… things his own kids were never allowed to do.

So ends the story of a life well lived, a life that will NEVER be forgotten. So, hon, here’s one more blown kiss that says “Be seeing you.” Our next date will be in Heaven, together forever.

Jerry is preceded in death by his father, Jerome Simon and his brothers, Donnie Simon and Roger Simon.

Donations may be made to Disabled American Veterans, PO Box 14301, Cincinnati, OH 45250-0301. Envelopes will be available at the funeral home.

Haley McGinnis Funeral Home & Crematory is both honored and privileged to be entrusted with the care of Mr. Simon. Leave your messages of condolence for the family of Jerry Simon and sign his virtual guestbook at www.haleymcginnis.com.