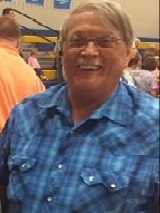 Jerry Lane Jessie, 66, of Edmonton went to his heavenly home on August 26, 2021. He was born October 15, 1954 to the late Hubert Earl and Laura (England) Jessie. Besides his parents he was preceded in death by a brother and two sisters. Bobby Glen Jessie, Lois Goad and Shirley Diane Jessie. His mother and father in law, Coy and Winnie Coomer.
Jerry served as former Metcalfe County jailer, retired from the United States Postal Service and was a member of the New Life Ministry Baptist Church. Jerry was an easy-going man and was loved by many.
Jerry is survived by his loving wife of forty-eight years, Patricia Lee (Garrett) Jessie. Two children. Bradford Lane Jessie and Sabrinia Lee Russell (Ronnie). One grandchild he helped to raise, Brilynne Gibson. Five additional beautiful grandchildren he adored. Ronnie Lane Russell, Braxton Lane Jessie, Brayden James Russell, Peyton Elizabeth Jessie and Kimber Lane Jessie. One very special great granddaughter Avie Lee Gibson. I baby Massy is due in March. He is also survived by a brother Earl (Mary Jane) Jessie and a sister in law Berniece Jessie. A brother in law and sister in law Robert and Sherry Honeycutt. Several nieces, nephews and great nieces and nephews also survive.
Funeral services for Jerry Jessie will be held 1:00 PM, Wednesday at Butler Funeral Home in Edmonton with burial in the Metcalfe County Memorial Gardens. Visitation will be from 4:00 PM until 8:00 PM, Tuesday and after 9:00 AM Wednesday at the funeral home.
In Keeping with the families wishes, Mask will be required during the visitation and funeral.
Butler Funeral Home is both honored and privileged to be entrusted to the care of Mr. Jessie. Please share your messages of condolence with the family at www.butlermemorials.com.