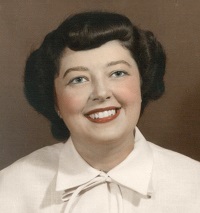 Born in: Loyall, KY
Resided in: Vincennes, IN

Jeanne Boyer, 91, of Vincennes, IN went to be with the Lord, August 3, 2022. She was born March 14, 1931, in Loyall, LY to the late Clyde and Gladys (Davis) Engle. Jeanne graduated Loyall High School in 1949 and continued her studies at Cumberland Community College in Williamsburg, KY where she graduated with an associate degree. She worked as the owner and operator of Boyer’s 1-hour Cleaners for 40 years. Jeanne married, the love of her life, James W. Boyer on December 27, 1951. She was a proud member of First Baptist Church in Vincennes, IN where she taught Sunday School. Jeanne enjoyed many things in life such as knitting, crocheting, reading, studying Native American culture, and traveling out west. She will be deeply missed by all.

Jeanne was preceded in death by her parents; husband James W. Boyer; and sister Carolyn Rosenbalm.

Goodwin-Sievers is honored and entrusted with the care of Ms. Boyer. A funeral service will be held Tuesday, August 9, 2022, at 1pm EST and 524 Broadway St. Vincennes, IN 47591.