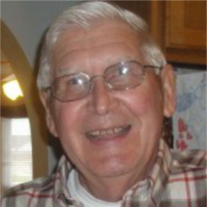 James Wayne “Big Daddy” McCarter, 80, finally made it home to the Lord on Wednesday, January 29th at his home. He was born in Emison, Indiana in 1939. He graduated from Carlisle High School in 1957. After graduating, he moved to Owensboro where he met & married Shirley Ann Bell. They had 6 children & 45 years of marriage before cancer took her home to the Lord in 2004. Jim & Shirley stayed very active at church and also enjoyed the horse races at Ellis Park. Jim was a devout Catholic his entire life and was a Third Order Franciscan. In 2007, Jim was the recipient of the Sophia Award for exemplary service in the Diocese of Owensboro. Jim was a Police Officer with the OPD for 25 years where he was the first patrolman to ride a police motorcycle. He was the FOP Club President in the 1970s. After retiring, he kept busy doing janitorial work at Cigar Factory Mall and at Precious Blood Catholic Church. Jim was also a volunteer at many places. In 2005, he began volunteering at the Hospital where he administered Holy Communion and prayers to the sick and dying. This was his passion and he brought blessings to all he encountered. It was here that he met his wife, Rose, who had also lost her spouse of 51 years. Their friendship soon blossomed into a true love story. They were married August 18, 2007 at Precious Blood Catholic Church. Jim and Rose were also very involved at church and along with Sunday Mass, they were always at Wednesday night Mass where, for years, they would then meet family and friends after that Mass at Los Cabos. They truly saved each other and shared many amazing cruises, a trip to Italy where he was especially happy to visit Assisi and the Vatican. They also went several times to Las Vegas, South Carolina, New York City, and other small trips. Jim and Rose shared 12 years of wonderful life together and their families became one. Jim was preceded in death by his parents, Gilbert and Anna McCarter; his first wife, Shirley Ann McCarter, his brother, Earl McCarter, his sister, Violet Saucerman and his step-daughter, Cindy Warren Bickett. Jim is survived by his wife, Rose Smith Warren McCarter; his children, Darlene McCarter, Jeff (Pamela) McCarter, Darryl (Sam Koon) McCarter, Vince McCarter, Jody (Kris) McCarter, Jamie (Adam) McCarter Ross, his step children, Stephanie Warren, Tamara Warren, Marty Warren, Johnny Warren, Melanie Warren Ewing; his sister, Mary Ostrum, 12 grandchildren, 5 great-grandchildren, 14 step-grandchildren, numerous nieces and nephews. Services will be 11:00 am Saturday, February 1, 2020 at Precious Blood Catholic Church, with Father Jerry Riney officiating. Visitation will be 3:00 pm to 8:00 pm Friday at Haley McGinnis Funeral Home & Crematory, and again from 9:00 am to 10:30 Saturday at the funeral home. Prayers will be 6:00 pm Friday at the funeral home. Private Burial at Rosehill Cemetery at a later date. Haley McGinnis Funeral Home & Crematory is both honored and privileged to be entrusted with the care of Mr. McCarter. Share your messages of condolence with the family of James Wayne “Big Daddy” McCarter at www.haleymcginnis.com