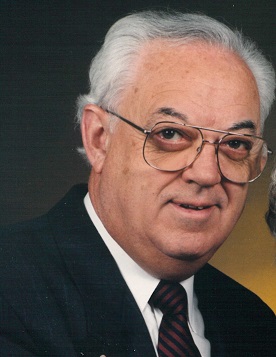 James W. Pirkle, 85, passed away 8:14 pm on Wednesday, July 29, 2020 at the Villages at Oak Ridge. Jim was born on May 23, 1935 in Pike County the son of Leonard and Anna Pirkle. He married Margaret Spray on January 24, 1958 and she preceded him in death on August 19, 2019 after sixty years of marriage.Jim was a graduate of Winslow High School and the Indiana College of Mortuary Science. In 1957 he joined the Gill Brothers as a funeral director/mortician and upon their retirement in 1974, Jim assumed ownership of the firm. He owned and operated Gill Funeral Home along with his wife Margaret for many years and was very proud of the fact that he served families of Daviess County as a licensed funeral director for over fifty years. Jim was also involved in many local civic organizations, including Kiwanis, Jesters, Hadi Shrine, Masonic Lodge #30, and the Daviess County Historical Society. He also served as deacon for many years at First Christian Church and was an avid antique car enthusiast.Survivors include his daughter, Michelle Brown and her husband Bill of Washington, IN; son, James Pirkle of Washington and his grandchildren, Connor and Olivia Brown of Washington. Jim was preceded in death by his parents, two sisters, one brother and his wife Margaret.Friends may visit with Jim’s family and friends from 4-8 pm on Monday, August 3, 2020 at First Christian Church, 117 NE 3rd Street, Washington, IN 47501. Jim’s funeral service will be held at 10:30 am on Tuesday, August 4, 2020 at First Christian Church with Brothers Byron Holtsclaw and Richard Smith officiating. Jim will be entombed next to his wife Margaret at Sugarland Memory Gardens. Online memories may be sent to Jim’s family and friends at www.goodwinsieversfh.com. Memorial contributions may be made to First Christian Church, 117 NE 3rd Street, Washington, IN 47501 or Helping Hearts Hospice, 1314 E. Walnut St., Washington, IN 47501. Goodwin-Sievers Funeral Home, Washington is honored to assist the Pirkle family with arrangements.